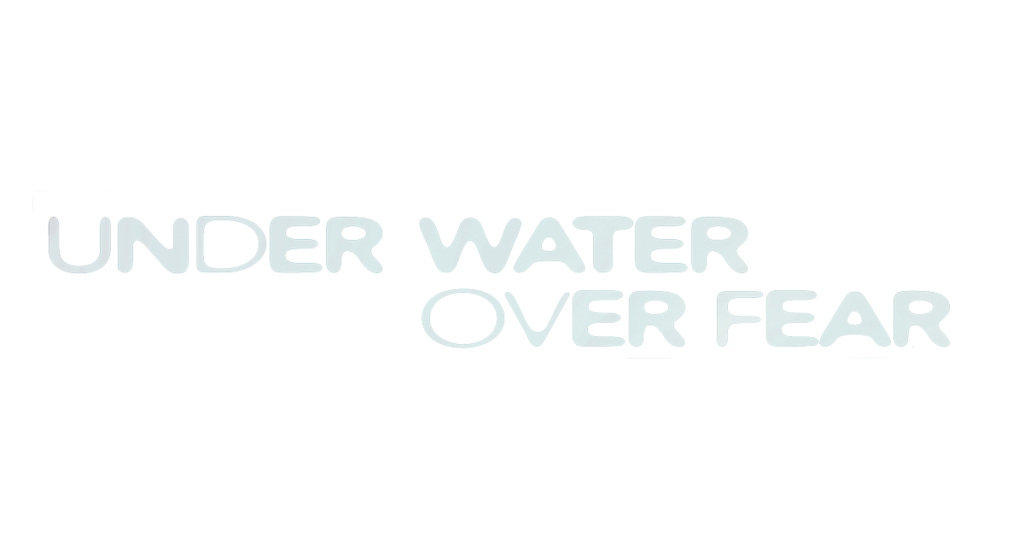 This piece originally appeared in print in the August 2019 issue of Louisville Magazine.

The first step to teaching adults how to swim is getting them to relax. “We have people line up on the (pool) deck and do breathing exercises, almost like we’re teaching them how to breathe in a yoga class,” says Amy Benton, co-founder of the Adult Learn-to-Swim initiative. William Kolb, the program’s other leader, says the goal is to get people more comfortable in the water than they were before. For some students, that means swimming laps and diving at the conclusion of the four-week session. For others, it’s being able to float without panicking.

The program, which started in April 2018 through the local chapter of U.S. Masters Swimming, has graduated 186 students so far. Benton says she wanted to bring the classes to Louisville after teaching a recent high school graduate from west Louisville how to swim at Lakeside Swim Club. “As I got to know him, he would say, ‘My mom doesn’t swim, my grandparents don’t swim, nobody in my family swims. There’s nowhere in my neighborhood to swim,’” Benton says.

On a recent evening at the Central High School pool in the Russell neighborhood, 10 students warm up with some aqua jogging. One of them, 73-year-old Betty Bayé, says the last time she made a serious effort to learn to swim was about 30 years ago, when she had a YMCA membership through her job as a Courier-Journal reporter. Back then, she says, “I thought I was doing pretty good, but then I took in water and panicked. They told me to come back, but I never did.

“But people ought to live some of their dreams, and this was just a dream of mine. If I never become — and I’m going to date myself — Esther Williams, that’s OK. This is the equivalent for me of people climbing Mount Everest or jumping out of a plane.”

Another student, Abby Blair, yells out, “Float like a butterfly, swim like a fish!” Later, she lets out a triumphant “Yessss!” after she swims her very first lap, 50 meters of freestyle. Other students look at one another doubtfully as an instructor demonstrates swimming by kicking (and not paddling) to the middle of the pool. Then one does it and looks back at the wall, surprised at her accomplishment.

“I was never afraid of the water. I would jump in. I just needed to understand the basics, like breathing and technique. I’m working on that and trying to have even, relaxed strokes. I think I tend to rush it, and that wears you out.”

“I was swimming on my back, and all the sudden I realized I wasn’t paying attention to what I was doing. I wasn’t thinking mechanics. It had kind of become a part of me. I was swimming.” 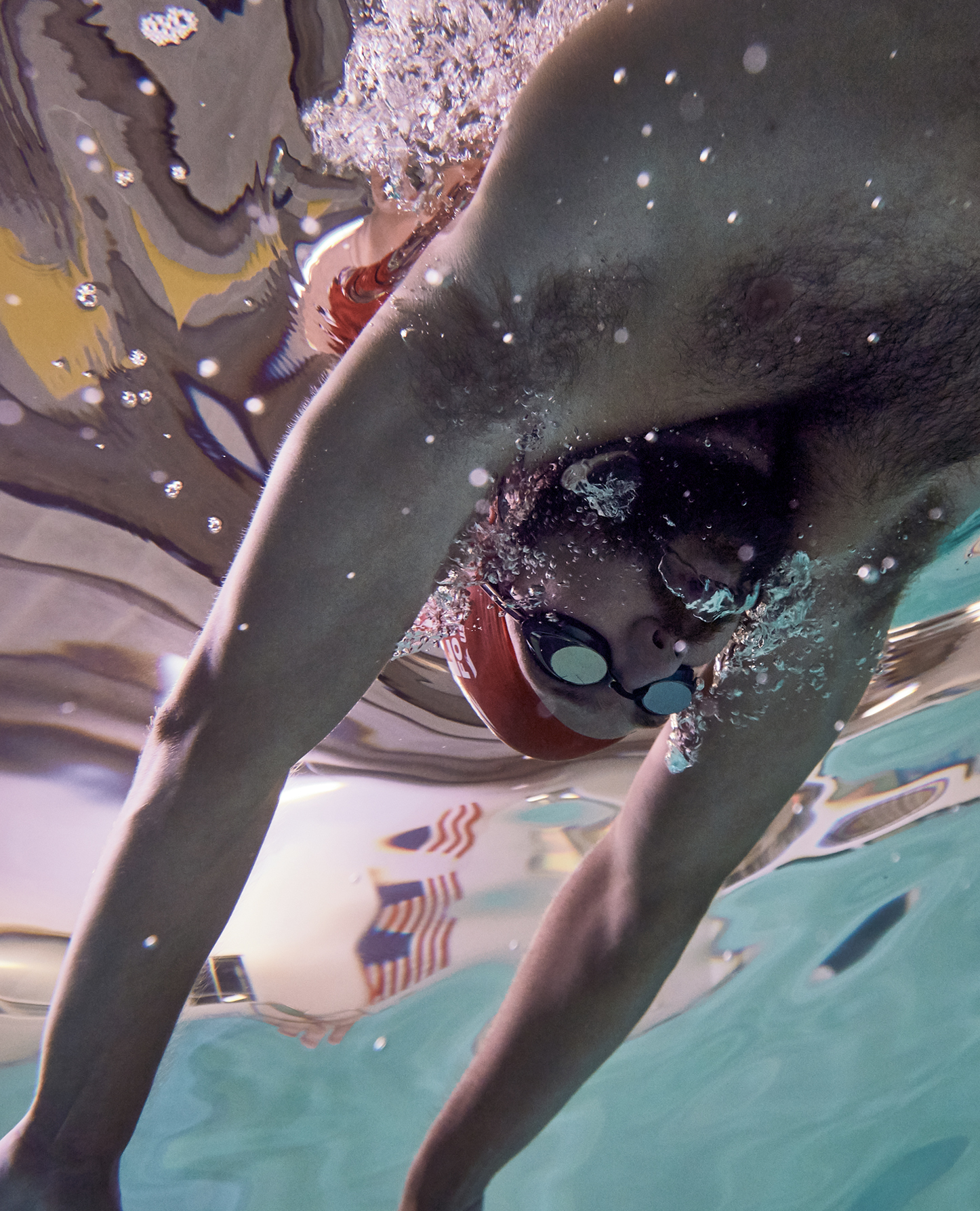 “I have two grandchildren, and the oldest one is just fearless. And I could see him literally jumping in the pool because he loves the water, and what am I going to do, stand there and watch him? So I was like: You gotta get on your game. You’ve gotta know how to at least save your own grandchild. It was day three when I felt myself actually swim. I maybe only got three strokes in, but it was like, You did it! That’s been my goal: Just keep going past where I was last time. Our first trip after (my daughter and I) learned how to swim was Aruba. And we stayed in the pool and in the ocean for six days.”

“We were out of the country and we paid for an excursion for swimming with dolphins. Me and one of my mother’s friends, we couldn’t swim, but we paid the same amount that everyone else paid. The lady that was guiding the excursion said, ‘Hey, you just stay on the ledge and we’ll bring the dolphins to you.’ That was the point where I said, ‘No longer will I pay the same amount and not get the same experience.”

“I’m like a lot of people who grew up in the West End and had a bad experience with getting thrown into a pool or getting pushed into a pool, so we just never went back. I learned to doggie paddle. I could float on my back, I could float on my stomach. But I never learned proper technique, proper breathing. And I had a fear of being in water over my head.

“We just celebrated the one-year anniversary of buying our first home, which came with a pool. So we have this huge pool in our backyard, so we thought: We really need to go ahead and learn how to swim.” 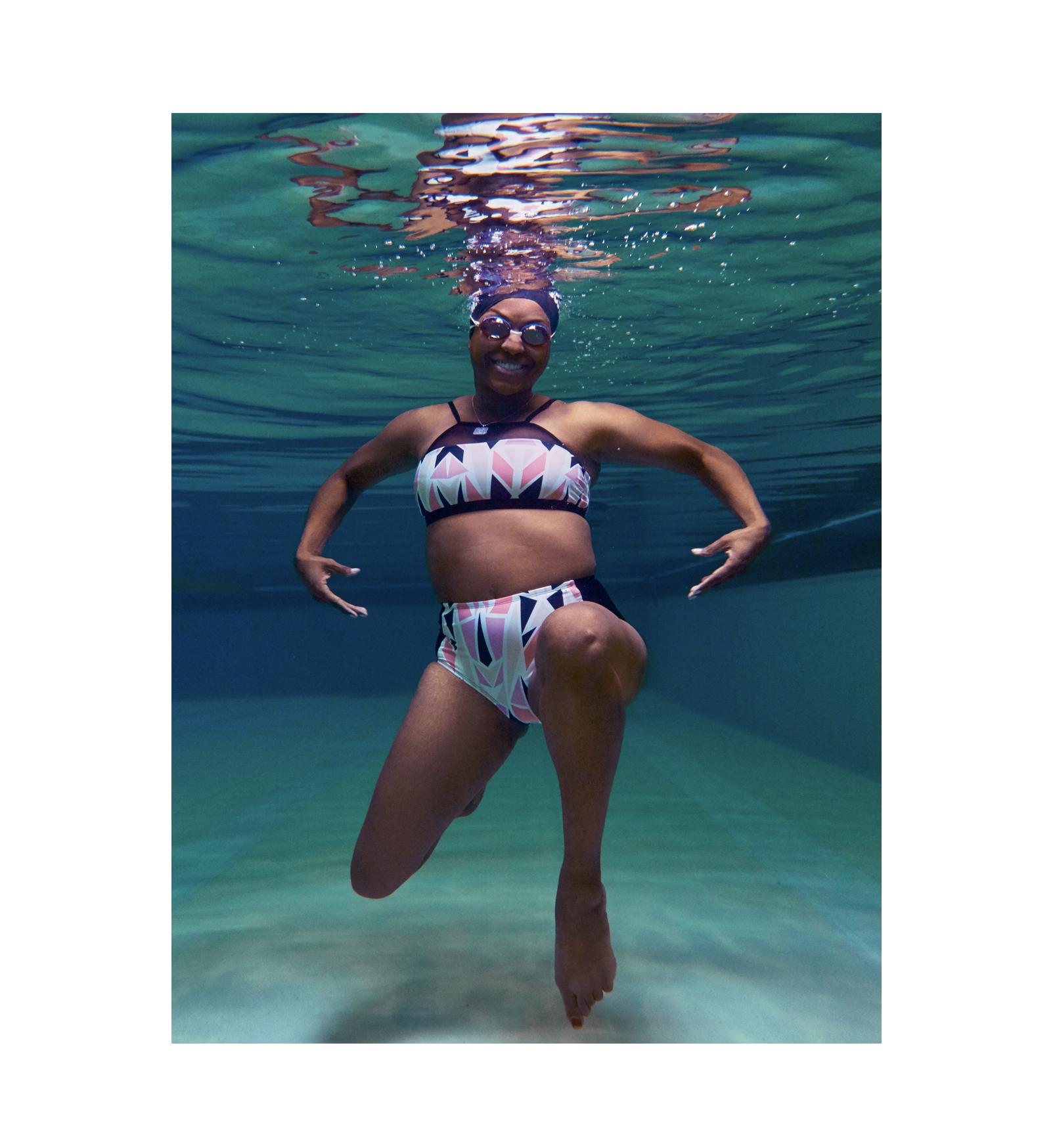 “I was so shocked that I did it, although I was very determined. While I was swimming, I was thinking: I’m still doing it; I’m moving. And then it’s like, oh, my gosh, I’m there! I did it. Not I almost swam, but: I swam! I swam the length of a pool.” 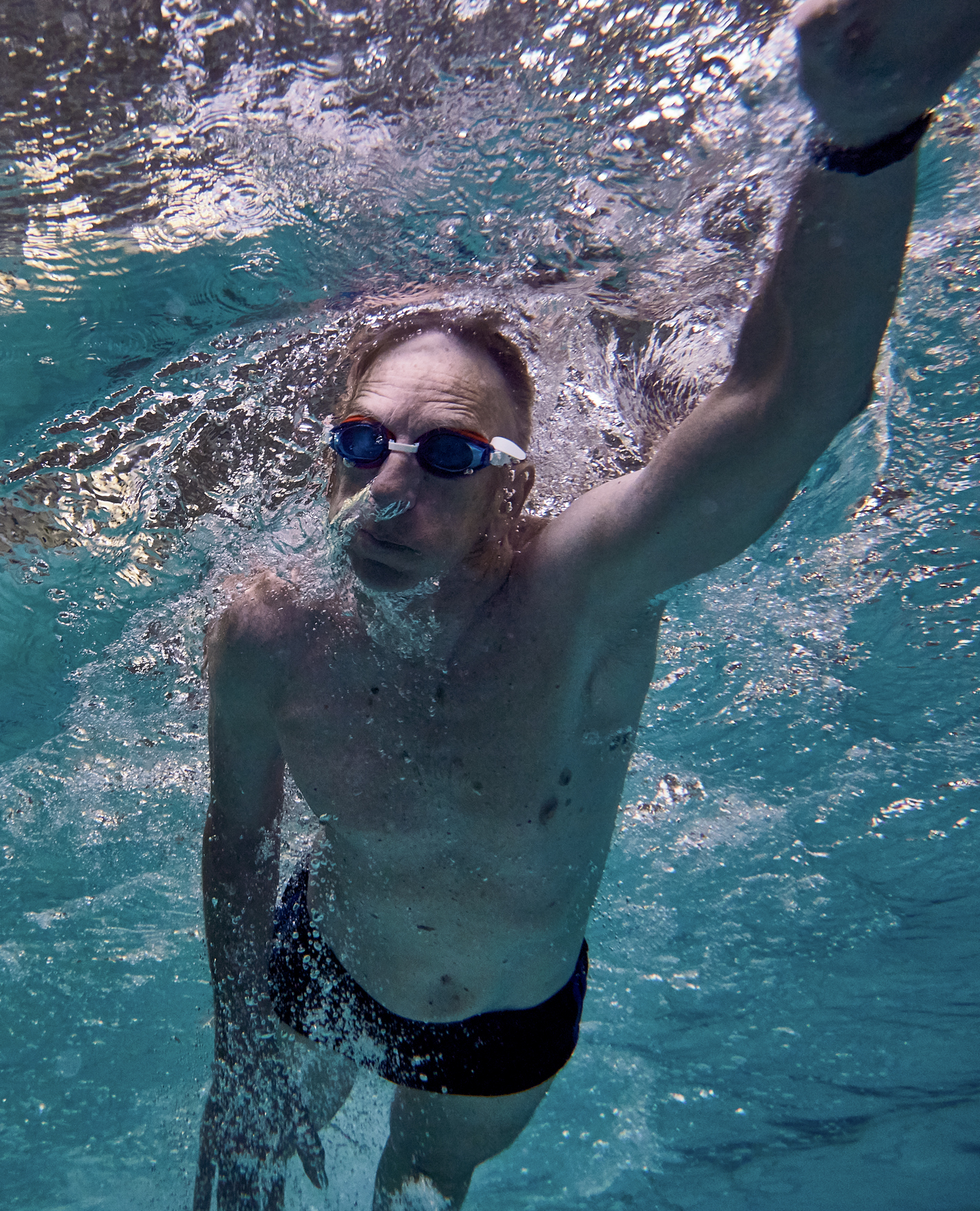 “I had a guy, he wasn’t afraid to put his head in the water or do a lot of things, but I could not get him to take his foot off the bottom of the pool. I had him with one leg on the bottom of the pool and had him hopping. So that was an achievement. And then I got him all the way out in chest-deep water, which was huge. One day we got a bunch of noodles underneath his legs, and his legs went up. And for 30 seconds he loved it. On the last day, I was holding him under his arms and he’s on his back and his legs are floating and he’s smiling. I’ll take it.”

“Sometimes to float, we put the noodle under them, or we help them by holding their hands. Sometimes, they need help putting their legs up. We get down under and push their legs up so we can keep them afloat.”

“Many of (the students) have had an experience they thought was drowning. I always say, ‘You didn’t drown because you’re still alive.’ They went in and panicked, and had to be pulled out of the water. Many of them have had that.” 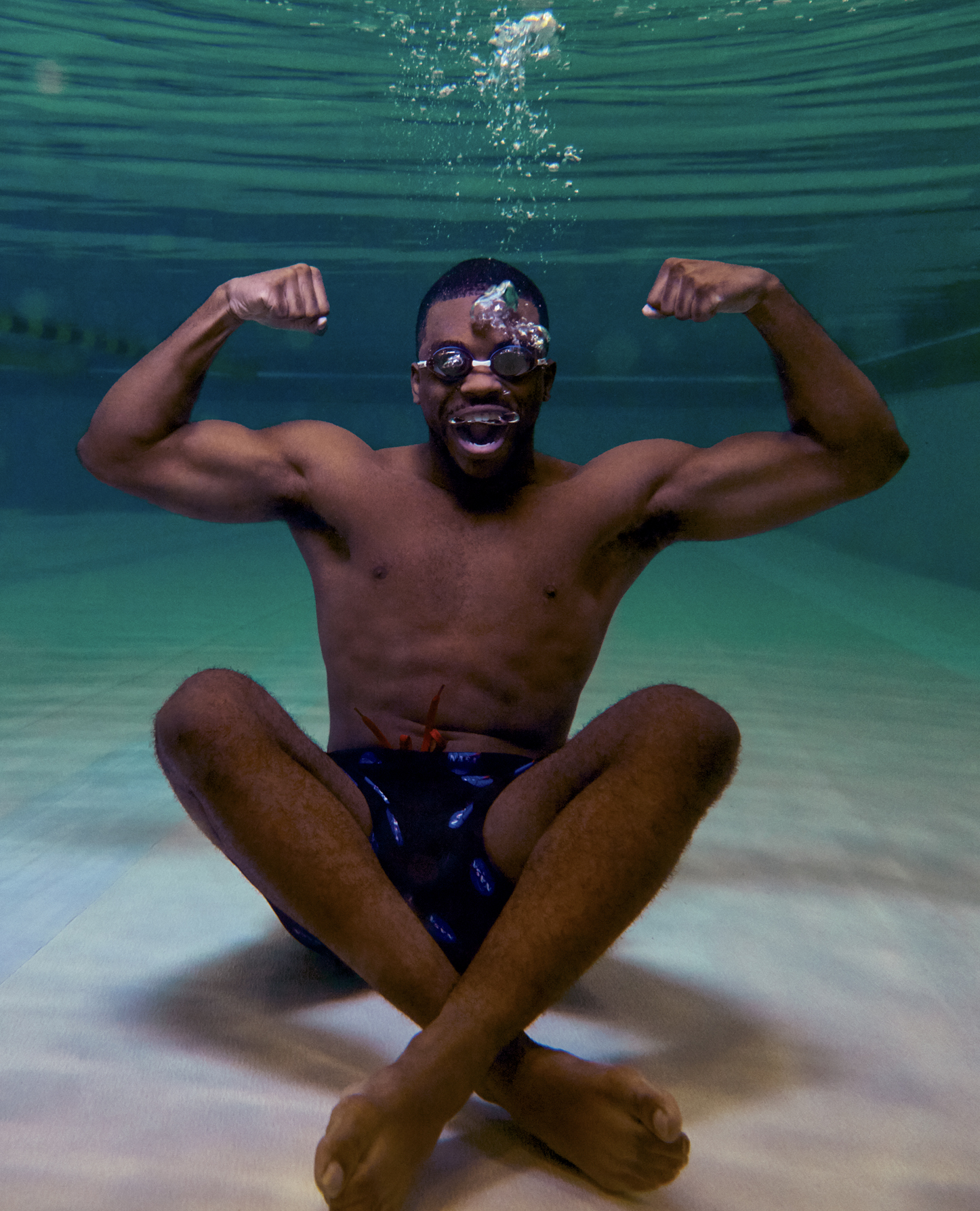 In June, Brown wrote an opinion piece for the Courier-Journal titled “Black people can’t swim in Louisville, and it’s putting kids at risk,” in response to closure of public pools for the summer. “I told the whole city that I didn’t know how to swim,” he says. Kolb read the story and invited Brown to take classes. 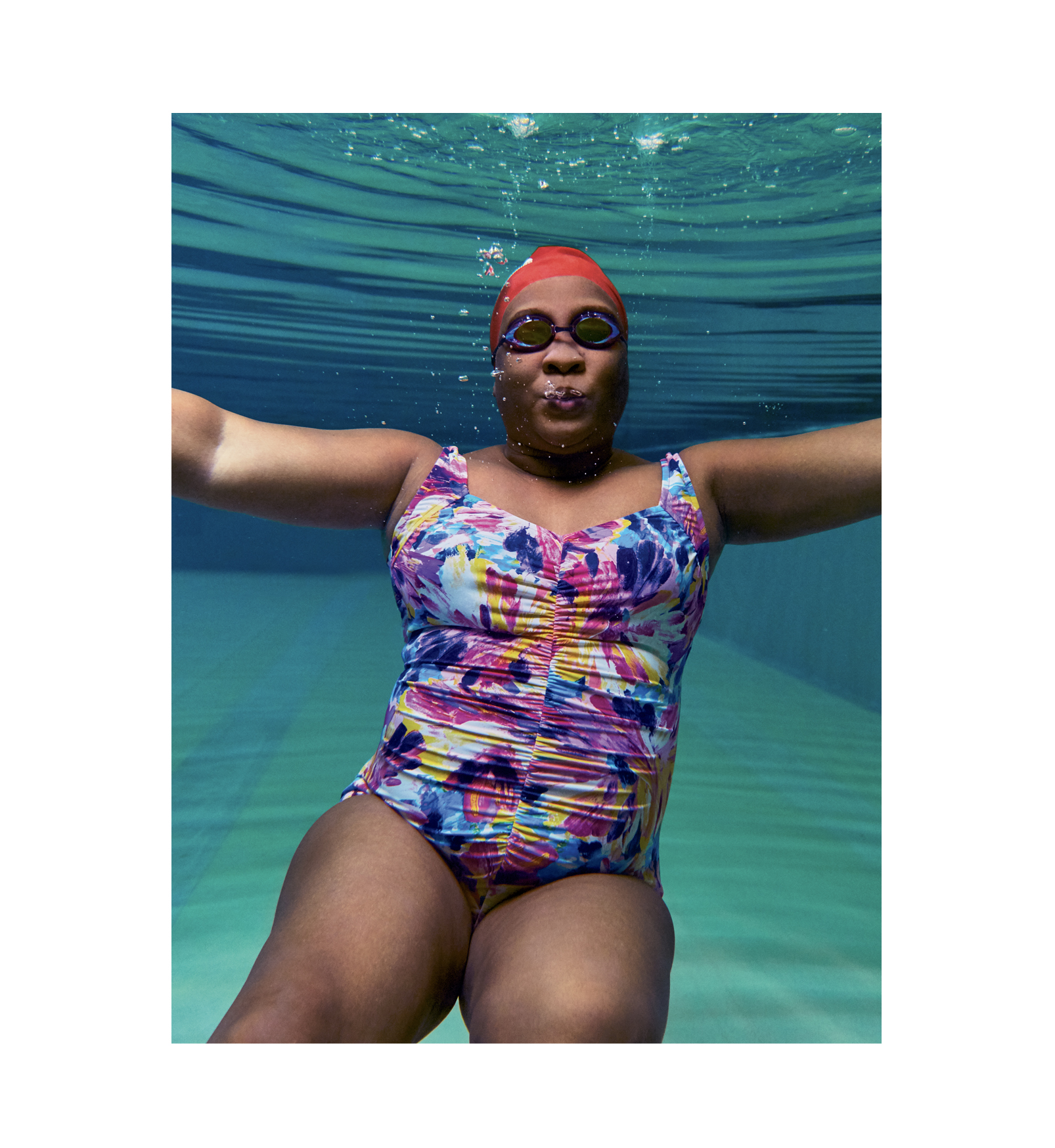 “In middle school, you go to the pool and everybody wants to dunk you. I was so not comfortable with water. I didn’t want it past my waist, couldn’t float if you asked me to — I was like a rock. But I take a lot of vacations and do a lot of cruises. I don’t want to just stand in the water; I want to be able to move in the water. I can’t snorkel if I can’t swim.”